The History of All Saints, Birchington

The oldest standing building in Birchington, is of course, the Parish Church of All Saints Birchington, which  stands in the centre of the village adjacent to the Square, and like other churches of Thanet about three quarters of a mile back from the sea.

It is positioned at the crossroads of two old roads, one which led from Minster Abbey to the sea at the little port of Gore-end, and the other to Canterbury crossing the River Wantsum by the ferry at Sarre. Its distinguished tower with its tall, graceful spire creates an unmissable landmark on the approach to Thanet, and years ago ships passing by on the offing used it as such. 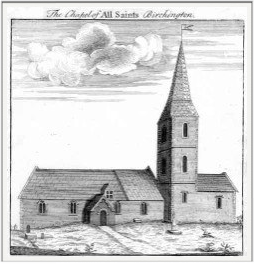 It is most likely that the church was originally a chapel of ease under Monkton and in its earliest form had a simple nave and chancel. This evidence of the older building, can still be seen in the outside south wall, where some stones have been re-used.

There is evidence of some of the pre-Reformation features, including the base panels of the medieval rood screen at the chancel steps, reinstated in 1905, and one of the corbels that held the great rood beam itself. Between 1863 and 1883 the Victorians made their contribution with a major renovation programme.

The most memorable windows in the church are in memory of Dante Gabriel Rossetti, who died in Birchington in 1882. The left is a reproduction of one of his own paintings, while the right was designed by Frank Shields.

In recent times there have been less dramatic changes. Among them, through the generosity of the present owner of Quex Park, the Quex Chapel has been made into a chapel of worship once more. In late 2010, the spire of All Saints became illuminated at night. It still stands like a beacon, welcoming people into the village from St Nicholas roundabout, encouraging travellers, as it has done since about 1350, to travel those last two miles with a lighter heart, knowing they are so near home. 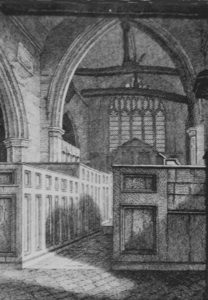 The exact date of the current church and the names of its founders are not known but it can be deduced from the records and from the style of architecture, the oldest parts of the Church are the Chancel with its side chapels, along with the Tower. It is believed that in c. 1250 the chancel was rebuilt, with the owners of Quex Park then adding a North Chapel, while the monks of Monkton added a southeast tower and chapel.

It is possible that the original owners of Quex may have built the original church, especially considering the north or Quex Chapel is the private chapel and property of the owners of the Quex Estate.

The Nave of the old church was increased in size in c. 1350 along with its five fine arcades of five bays, two narrow aisles and Norman door to the North side and is in the perpendicular style.

The large southwest pillar within the church suggest to us of plans that had to be altered, probably because of the Black Death, which resulted in us having two half aisles under one enormous roof. Around the same time, the spire was added to the tower – it still contains its original framework.

The walls of the Church are very thick and solid, built of rubble and faced with broken flints, the Kentish cobbles. The south wall contains some old stones within it, which can be seen on either side of the south porch, which was added c. 1430. These old stones which are of anterior date to the other stones used in the building have suggested that in line with tradition, they were brought from an ancient church which stood at Gore-end and which was pulled down on the encroachment of the sea and used in the re-construction and enlargement of the present church.

There are old octagonal piers constructed from old Kent Ragstone, which have well moulded caps and bases. The east window was rebuilt of Bath stone during the Victorian restoration of the Church in 1863 when the present tracery was inserted.

One of the oldest parts of the building is the south chapel, or the St. Margaret’s Chapel, above which is located the Tower in an unusual position at the south-east end of the Church. When the original small church of the three chapels was built in about 1250, before the Nave was added in the 1300’s, the Tower was in the usual position — at the south-west end of the church. The Tower, crowned with an ancient shingle spire is the only ancient shingled spire in Thanet. The spire has been re-shingled several times, with the last occurring in 1968 using Canadian Red Cedar Wood shingles. Historically, sailing ships found the Spire great use at sea to steer by on their way from the Thames to the Foreland and Trinity House provided a grant of £100 in 1864 to repair it. Capping off the Spire is mounted a vane in the shape of an arrow with the date 1699 cut out in the centre.

The Church for many centuries had a tiled roof which has been renewed on several occasions. Much of the woodwork of the roof was renewed at the 1863 restoration. At the base of the piers are stone seats which until the end of the 14th century were in most churches the only seats in naves. 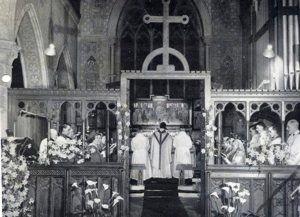 In the near centre of the north wall behind the current location of the font, opposite the south door may be seen the outline of an arch used formerly as another door and blocked probably at the restoration of 1863.

The Chancel is dedicated to All Saints. The beautiful reredos, was completed in 1883 takes the form of a triptych. This was designed by a Mr. C. N. Beazley and painted by Mr. N. H. J. Westlake, F.S.A., a well known artist at that time. This was restored and cleaned at the end of 2010. On the north side of the Altar is what is probably an Easter Sepulchre.

The oak Altar rails were installed in 1938, which were made by a local craftsman. On the south side of the Chancel attached to a pier is a brass of a priest wearing the vestments of the period. This was formerly on a ledger stone in the Sanctuary. The inscription states that the brass is to John Heynes, priest, sometime vicar of Monkton who died 9th October A.D. 1523.

In the vault beneath the Quex Chapel, formally the Lady Chapel, now filled in, are buried the previous owners and their relatives of Quex. This Chapel contains some wonderful and interesting monuments in brass, alabaster, stone and marble commemorating the owners of Quex from the early 15th century to the present day.

The Tower contains eight bells, the oldest being made in 1633. The Church Clock was installed in 1887, as a memorial of Queen Victoria’s Jubilee. There are a number of old and interesting tombstones in the Churchyard, the one of most general interest is that of Rossetti whose grave lies near the south porch, which was designed by his friend Ford Maddox Brown. In 1910, the two vestries were added.