The History of St Mildred

The little Church dedicated to St. Mildred was opened and dedicated in 1876 on a site given by a Mrs. Charlotte Rogers who once resided at Minster but at that time was residing at Nice in the south of France.

The land was given on trust for the purpose of holding divine service and also for a school for the education of children and adults. Built in 1879 by Charles Nightingale Beazley the ubiquitous church-builder and restorer of Thanet. The building is in the Gothic style of architecture.

Standing on the edge of the rolling Thanet farmland and at the edge of its tiny village, St Mildred church was built as both a place of worship and a school – hence the huge fireplace opposite the main door! It is located in Plumstone Road in Acol, Kent and is two miles from both Birchington and Manston Village with nearby Manston, Kent International Airport. Acol is described as a hamlet in the Isle of Thanet with a population of 300 people therefore not big enough to be classed as a village. The church takes its name St Mildred from the patron saint of Thanet.

The cost of the building was met by means of donations and collections and mainly through the efforts of the Vicar at that time. Rev. John Alcock. The Foundation Stone was laid by the Dean of Canterbury and the School-Church formerly opened by the Bishop of Dover. The Bishop in his address referred to the old church of St. Nicholas at Wade and to the new church in Acol, “the little place in the oak wood.” 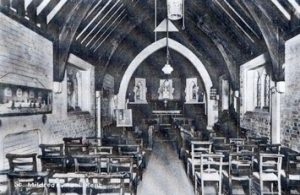 The building is constructed of an inside stock brick walling faced externally with stone quoins, stone pilasters and stone buttresses. The panels between the stone work are filled with flint. The cost was about £790.

The diminutive size of the church is increased due to it being cut into the ground on the south side. Dedicated to the area’s own seventh century saint, Mildred, a picture of which dominates the simple interior whose other statues confirm a devout congregation. There is no chancel arch, the sanctuary being defined by a tiny apse containing three rather good windows. Depicting Our Lady, the Crucifixion and St John the Evangelist they are by the little known firm of Gibbs and Howard of Charlotte Street.

There is a charming housewifely depiction of Our Lady with the tiny frog and mushrooms at her feet! Long may this quaint church serve its community.

St. Mildred was one of a family of Saints, she lived at Minster and was Abbess of the Nunnery there in Saxon times, succeeding her mother Domneva. In 1969, to preserve the Church, it was necessary to insert a foundation around the base of all the walls, suitably designed to stand the bearing pressure of the soil and the loading of the building above.

In early days the building was used as a meeting place for the Parish Meetings. There is a seating capacity of fixed pews and some chairs for fifty people. Worship led music is provided by an organ served by two organists who rotate their services, there is no choir. Services are led by the vicar from All Saints, Birchington and lay ministry.

The church provides special services at Easter, Harvest and Christmas during the Christian calendar year. Baptisms in church may average to six and about four Weddings including blessings during the year. These days there are not many funerals’ held at the church, these are mainly held at the local Crematorium in Margate. There is no consecrated cemetery within the church grounds.