The History of St Thomas

A letter in the Archives of All Saints’ Church Birchington, records that in 1924 the then Arch-deacon of Canterbury, Dr. Randall Davidson, accepted as a Gift on behalf of the Diocese from Mrs. Haidee Ida Kearns, in memory of her late husband Colonel Thomas J.  Kearns, C.B., C.M.G., the  site upon which St.Thomas’s Church has been erected.

The building, which was started in 1932, was in the hands of Messrs. Rice & Son of Margate.

The total cost was to be £2,896.14.2. The initiative for the building of a Church at Minnis Bay, and the laying of the foundation stone by the Masons came from Lt.Col. George Ingleton Phillips, C.B.E., the founder member of the Brothers of Birchington Lodge of Freemasons.

This ceremony was unique in as much as a Moslem took an active part in the Stone Laying ceremony. He was Worshipful Brother Colonel Nawab Malik Sir. Umar Hayat Tiwana, K.C.I.E., C.B.E., M.V.O., who was the A.D.C. to His Majesty the King and lived in Spencer Road when not on duty in London. 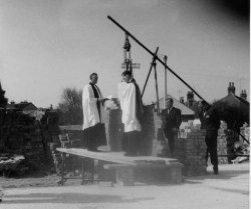 The first service was held on Christmas morning 1932 and although the building was not complete there were 80 people present.

On 5th February 1933 the Dedication Service took place. The Vicar was the Rev. A.O. Hayes and the Service was conducted by the Bishop of Dover.

In April 1933 the Vicar announced that, by the generosity of Mrs. Kearns who had donated £2,000, the Church was free of debt and the Bank pass-book showed a balance of £17.12.l. It was decided to put 5/- a week into Lloyds Bank until 1938 to pay for the re-painting of the steel girders in the roof.

The Vicar was asked to announce from the pulpit that men would be welcome at the Services in flannels or other sports clothes and need not think it incumbent upon them to wear “Sunday clothes”. The Vicar also asked that another row of “ground glass” should be put in the window near the pulpit, as the preacher finds his thoughts disturbed when he looks out at the traffic.

Between 1933 and 1936 Mr. A.E. King laid lawns and planted 100 euonymous shrubs to make a hedge. He kept the garden in order, scrubbed Church floors, occasionally washed and dried the linoleum and in 1934, stained the Church floor – all for 1/- per hour. Mrs. Kearns paid him 6d per journey to come and open the Church doors in the morning, and close them in the evening.

In October, on the third anniversary of the Laying of the Foundation Stone, the Brothers of Birchington Freemasons held their annual Eucharist which took the form of a Memorial Service for Lord Cornwallis. The Masons continued to show an interest in St. Thomas’s. They furnished the Lady Chapel and had it panelled  with oak.

A Memorial Service was held in March 1936 for Lt. Col. George Ingleton Phillips who had died in Malta on the way to the Holy Land. There is a commemorative plaque in the Church. Lt. Col. Phillips was responsible for the idea of founding a Church at Minnis Bay and it was he who persuaded Mrs. Kearns to be so generous with her gifts of land and money. He was a Lay Reader for 50 years and together with Major Hunter conducted Evensong for many years.

In 1937 the Archdeacon dedicated the new Organ in the Lady Chapel, which cost £394 and was paid for outright.

In the same year the Rev. Peter Birkett and the Rev. Harry Carmichael were ordained Priest.

When War broke out in 1939 there were no blackout curtains for St. Thomas’s, so Evensong was sung at 3-15 p.m. (All Saints’ windows were boarded up).

That year Christmas parcels were sent to all the troops from Birchington – 130 of them, each containing a woollen garment, a book, a Christmas cake, some chocolate, a Christmas card and a sprig of mistletoe.

During 1942 several of the Holy Communion Services were conducted by the Rev. G.A. Kay, Chaplain to the Forces stationed at Minnis Bay.

In 1943 Holy Communion Services only were held – until November when Mattins was started by the Vicar, with the Rev. David Reeve starting a Sunday School in 1944.

During 1945 the garden was put in order, the exterior of the Church was painted and people returned.

Once again, St. Thomas’s came to life and social activities were discussed, with Mr. Fox-Davies, undertaking to supervise work in the garden. 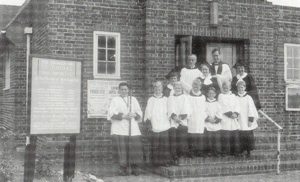 It was announced that during 1948 St. Thomas’s must contribute £100 to the Parish Church.

It was  suggested that profits made from social events (which were held in the Congregational Hall) be devoted to building up a fund to erect a hut for social gatherings.

On 5th August 1951 Mrs. Kearns, M. B. E., died at the age of 89. In her Will she bequeathed “Sunnycot’, 4 Grenham Bay Avenue, to the Ecclesiastical Commissioners, for a residence for a Minister officiating at St. Thomas’s, also £1,000 to invest, for the income to maintain the house.

Mrs. Kearns was a great pillar of St. Thomas’s. Her care and love for the Church was well known. It was due to her generosity in giving the Site and money, in memory of her husband, that the Church was built.

To mark the Coronation in June 1953, the Archbishop of Canterbury (Geoffrey Fisher) made a Progress from St. Augustine’s Cross through Thanet.  At the Winter Gardens the girls from Queen Bertha’s School staged  “In Praise of Queens – the Story of Seven Queens.” Many St. Thomas’s girls and adults took part; the pageant was organised by Miss Hunt and Miss Randall-Harris, the two Headmistresses.

In February the following year, Frederick Harry Bacon died, having been eight years the faithful and devoted custodian of St. Thomas’s.

In the same year, Mr. Gravell and his family brought the Children’s Special Service Mission to Minnis Bay for the first time. Also in that year the Annual Harvest Supper was started at the Congregational Hall.

In 1955 the glass screen was put into the wooden frame which divides the Lady Chapel from the Chancel to keep out draughts.

In August 1957 the Rev. C. Donaldson devised a Procession from St. Thomas’s to the beach. Young Churchgoers demonstrated in costume some activities from the Church, e.g. a Wedding party, a group of Confirmation Candidates, a Christening party and a surpliced choir. A great crowd of holiday makers joined in singing well-known hymns.

New Porch doors were given in memory of Mr. Charles Hawkes and the Church was sprayed for woodworm at a cost of £67.10.0.

In 1959 a Gift Day for the Kearns Memorial Hall raised £61.5.0. and the following year the Church ceiling was sprayed for woodworm to last 20 years.

Dr. Arthur Ffolliott William Denning,  MB, BS,  died in 1961 – there is a Memorial tablet in the Church.

Dr. Denning was a devoted worshipper and well loved Physician in Birchington.

In 1962 the new Archbishop, Dr. A.M. Ramsey, paid a short visit. He was met by Miss Hunt, Miss Randall-Harris and Mr. Len Taylor. The Summer Fete of that year, which was organised by Mr. Macpherson, raised £67 for the Kearns Hall Fund which then stood at £850.

On 29th/30th December 1962 there was a great Blizzard in the area. Deep snow and frost covered Thanet, with the deep snow remaining until February. The sea was frozen and people had difficulty in getting about.

In March 1963 Miss Vera Gaunt accepted the post of Hon. Secretary of the St. Thomas’s Committee.

On Thursday, 16th April 1963, the morning post brought a letter to the Rev. Christopher Wayte containing a cheque for £4,000 from an anonymous donor for the Building Fund for the Hall. This meant work could begin as soon as the plans were passed.

On 12th May farewells were said to the Rev. C. Donaldson who had been with us since 1955.

On 7th August of that year, the Institution and Induction took place of Rev. F.H.V. Fordham. He and Mrs Fordham came to us from Maidstone.

In the following year of 1964, on 5th March, the construction of Kearns Hall commenced.

On 11th April the Foundation Stone was laid by the Rev. Raymond Sheekey, which was followed by Tea.

A couple of months later on 18th August saw the arrival at 4 Grenham Bay Avenue of Rev. and Mrs. Peter W. Poole.

On 26th October Kearns Hall was dedicated by the Archdeacon of Canterbury, the Ven. A. Sargent.

In November the Sunday School began to meet in the Hall.

On 6th January 1965, Silver candlesticks were stolen from the Children’ s Altar. They had been given in 1938 by Mr. and Mrs. Chevin Hall.

On Maundy Thursday Queen Elizabeth II presented the Maundy money at Canterbury. Our Mr. William Luetchford, aged 86, was a recipient. He was a great worker for our Parish Church for 52 years. 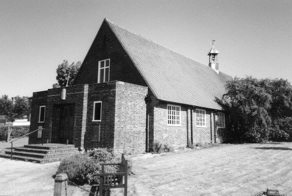 On Easter Day 1966 Mr. Macpherson put the replica of the Holy Sepulchre in the garden as usual to represent the Tomb of Jesus.

The St. Thomas’s Players presented several plays during the year and continued to entertain us until 1969.  These were produced by Joan Preston and the cast included Joan Denning, Len Taylor, George and Dorothy Sickel, Tom Latimer and J. Bourne.

In 1967 the Rev. P.W. Poole moved away to Newington to continue his ministry.

In 1968 the Church Finances were in a bad way, barely solvent. It was decided that proceeds from the Summer Fete should go to Church Funds.

The new Curate, the Rev. Patrick Thompson, and his wife Glenda arrived in November and moved into 4 Grenham Bay Avenue.

In 1970 a new Processional Cross was dedicated in memory of Rev. Cecil Swann and later that year, the new light blue robes were worn for the first time by the Choir.

In 1971 the Rev. P.  Thompson was appointed Vicar of St. Mark’s, South Norwood, shortly afterwards arrived the Rev. and Mrs. Campbell Snow and their three children.

At the 40th Anniversary of Dedication, the Bishop of Dover was ill and unable to come, so the Service was taken by the Vicar. Three people attended who were present at the original service in 1933 – Miss Randall-Harris, Miss Phillips and Mr. A.T. Walker.

Mrs. Gibbs agreed to play the piano for Services while a new Organ was ordered. The new Organ was later delivered at a cost of £500.

In 1977 the Rev. Patrick Sales, Mrs. Sales and Dominic moved to Boughton-under-Blean with Dunkirk.

The Vicar informed the St. Thomas’s Committee that the Parochial Church Council had decided to sell 4 Grenham Bay Avenue.

In 1979 the Rev. F. Fordham announced his retirement. On 6th December Mr.  P. Hall agreed to undertake the duties of Sacristan.

In May 1980 the Rev. Arthur Collins became our new Vicar.

It was agreed in 1981 that Kearns Hall should be made available for Old Time dancing and ‘Keep Fit’  Classes, subject to suitable and acceptable arrangements being made.